I love detective games. From LA Noire to the Sherlock Holmes games to Her Story, anytime there’s a digital mystery to be solved, you’d better believe I’ll be the first one to pick up a controller and start looking for clues. Return of the Obra Dinn is the follow up to 2013 indie darling Papers, Please, and it’s captivating, time-bending story and puzzles easily make it the most compelling mystery I’ve ever tried my hand at solving.

The first thing most people notice about Return of the Obra Dinn is its striking art direction. Solo developer Lucas Pope wanted to employ a 1-bit graphical style similar to old Macintosh computers, and the result is a game that looks unlike anything else on the market right now, favoring a unique visual flair over photorealism and millions of polygons. Although Return of the Obra Dinn has a simple approach to graphical fidelity, it is not a game with lighthearted subject matter in the slightest. People get shot, people get blown up, people get ripped apart. There’s a lot of death and violence in Return of the Obra Dinn, and it’s incredibly detailed for a game that looks like this.

Death plays a key role in this game’s narrative. A ship by the name of Obra Dinn arrives back at port with it’s all 60 of its passengers and crew either dead or missing. You play as an investigator who has been tasked with finding out what happened aboard the Obra Dinn. You bring a log with you, filled with the names, nationalities, and professions of everyone aboard, a map of the ship’s layout, and sketches of the crew. As you step onto the ship you’ll find that there’s not a lot of corpses and a whole lot of “what do I do?” That’s where Return of the Obra Dinn’s central mechanic comes into play: the Memento Mortem.

Memento Mortem is the fancy name for the stopwatch that you’re given to aid you in uncovering the story of the Obra Dinn. This watch allows you to go up to any body and relive its last moments. You can hear the dialogue and sounds leading up to death, but all you get to see is the actual moment of death. After viewing one person’s final moments, the watch will reveal a new body somewhere else on the ship. This, in combination with the log, will help you ultimately identify all 60 passengers of the Obra Dinn and determine their fates. After a simple tutorial explaining how the watch works, you’re left to your devices. Unlike most other detective games, there is no hand holding. There are no tooltips. You get no help. And this is why Return of the Obra Dinn excels. 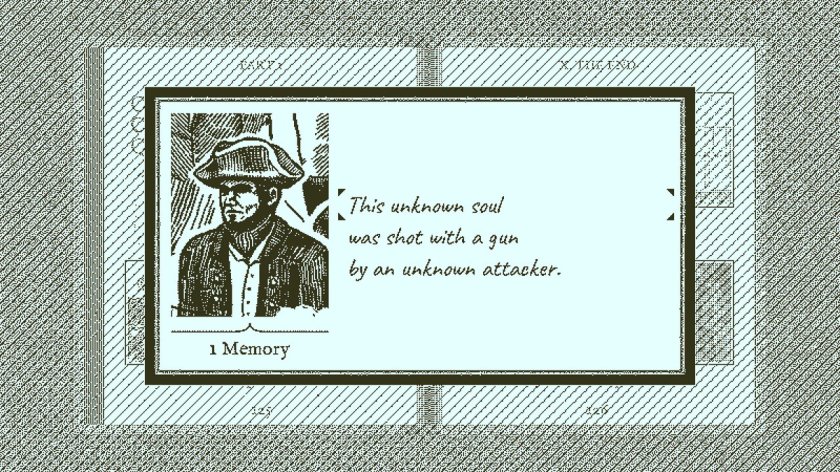 Finding out what happened aboard the Obra Dinn initially seems like gargantuan task. You have the names of 60 people and sketches of the crew, but names aren’t tied to sketches, and nobody’s alive to tell you who’s who. To make things worse, not only do you have to identify each person, but also what and who killed each person, along with all the details. For example, if someone was shot, be prepared to say with what, whether it be a gun, cannon, or some other weapon. To complicate things even further, Return of the Obra Dinn’s story is told out of order, and people rarely address each other by name in the watch flashbacks. Some scenes also feature multiple people having simultaneous conversations, so unless you’ve matched a voice to a face, you’ll have to dig deeper to find out who’s saying what. In essence, Return of the Obra Dinn is one huge logic puzzle, and a highly entertaining one at that. 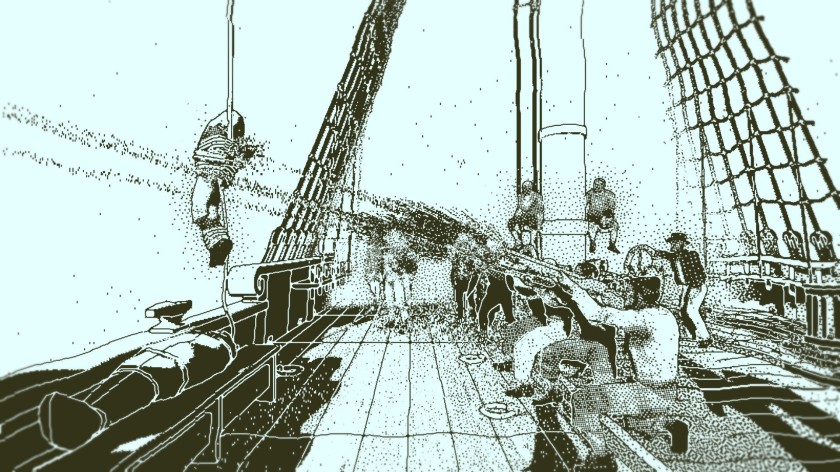 While mechanically simple, Return of the Obra Dinn has puzzles than continue to surprise me with their depth. One time I identified someone based off their accent. Another time I had to trace bullet trails to find out which one dealt the killing blow. One flashback put me behind a wall with small windows, obscuring the action and forcing me to get creative with my viewing angles. The less you know about Return of the Obra Dinn going in, the better. You want to take your time with this game and go in as blind as possible.

Return of the Obra Dinn starts out simple, almost deceptively so. Then it hits you with a shocking moment that turns everything you thought you knew about the ship on its head. Then it does it again. And again. Return of the Obra Dinn is fantastic at subverting expectations and throwing a wrench into things when you’re were certain you had it all figured out. It forces you to think, and it’s incredibly satisfying to correctly identify a crew member. It’s a game full of cross referencing and eureka moments, but most importantly of all: it makes me feel like a real detective.

Return of the Obra Dinn is available now on Steam for Windows and Mac.